Like all civilizations that developed in times when there was no rigorous scientific method, the ancient Greeks used to explain certain phenomena by inventing and telling many myths about it. One of the most representative figures of Greek mythology is that of the Cyclops, the gigantic anthropomorphic (and anthropophagous) beings with only one eye who lived in Sicily and who assisted the god Hephaestus in his forge. Today, thanks to the discoveries that have been made, we can in a sense say that the Cyclops really did exist, but that they were not exactly what the Greeks thought. The most certain explanation of the origin of this myth comes from many finds of fossil remains scattered throughout the main islands of the Mediterranean. These fossils belonged to some very ancient (and very particular) species of elephants, which were very small in size. Try to imagine an elephant no more than a meter and a half high … well until a few thousand years ago, these animals belonging to the genus Palaeloxodon (the primordial ancestor of our elephants) populated our islands. 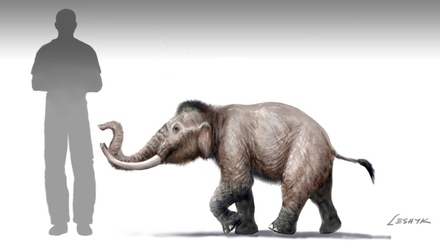 The size of these animals can be attributed to a phenomenon called insular dwarfism, which leads some species, during their evolution, to progressively reduce their size because it was not necessary. In fact, the small islands, for various reasons, are not particularly suitable for hosting too large animals; one of the many reasons is that, since there are no large predators, the preys themselves do not need to get bigger to keep up with them. The skull of these elephants was aesthetically referable to that of a huge skull with only one eye in the middle of the forehead. In reality that hole was not associated with the eye of a giant, but with the nostrils of these elephants and their proboscis. 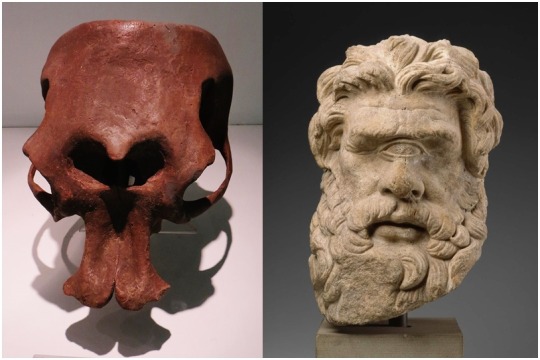 It is also interesting to know that insular dwarfism has also affected some species of man; for example in Indonesia (which coincidentally consists entirely of islands) the remains of some of our ancestors have been discovered such as Homo Floresiensis, about one meter high. Several remains have even been found in Sardinia and Corsica which belonged to a species of Mammoth that underwent the same process, the Sardinian dwarf Mammoth. Returning to mythology, the fame of the Cyclops is probably to be attributed to Polyphemus, the Cyclops who gave Odysseus and his traveling companions a hard time. In Homer’s work, when Odysseus managed to escape from Polyphemus’s cave and move away from the coast with his ships, the blinded Cyclops attempted to sink the ship by throwing huge boulders at him. In this passage of the Odyssey, Homer explains the origin of the current archipelago which is located near Aci Trezza (the place where Polyphemus and his brothers lived), the Cyclops Islands, or the Faraglioni of Aci Trezza. Perhaps it is no coincidence that, in the Catania dialect, to indicate an aesthetically ugly person, one compares him to the “scogghi da Trizza” (the rocks of Aci Trezza in fact). 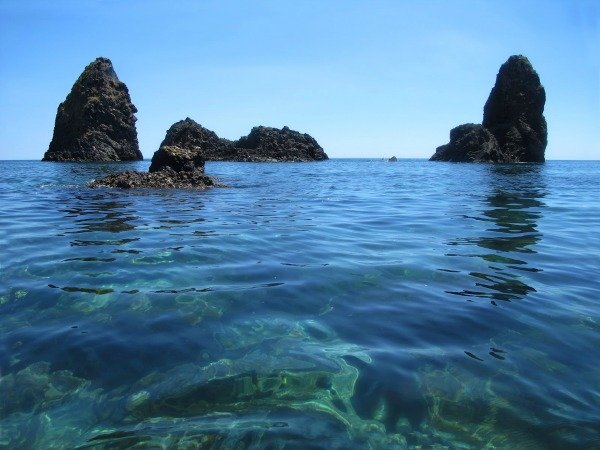 But the links between the Cyclops and Sicily do not end there. In fact, the Greeks, to give an explanation to the continuous and constant eruptions of Etna, said that inside the volcano, the blacksmith god Hephaestus had built his huge forge, where he was helped by the Cyclops during his uninterrupted work. It seems that for the Greeks, the lava of Etna was made up of molten metal or the scraps of the work of Hephaestus and his assistants, while today it simply represents a spectacle of nature that always leaves the inhabitants speechless.

We use cookies on our website to give you the most relevant experience by remembering your preferences and repeat visits. By clicking “Accept All”, you consent to the use of ALL the cookies. However, you may visit "Cookie Settings" to provide a controlled consent.
Cookie SettingsAccept All
Manage consent

This website uses cookies to improve your experience while you navigate through the website. Out of these, the cookies that are categorized as necessary are stored on your browser as they are essential for the working of basic functionalities of the website. We also use third-party cookies that help us analyze and understand how you use this website. These cookies will be stored in your browser only with your consent. You also have the option to opt-out of these cookies. But opting out of some of these cookies may affect your browsing experience.
Necessary Sempre abilitato
Necessary cookies are absolutely essential for the website to function properly. This category only includes cookies that ensures basic functionalities and security features of the website. These cookies do not store any personal information.
Non-necessary
Any cookies that may not be particularly necessary for the website to function and is used specifically to collect user personal data via analytics, ads, other embedded contents are termed as non-necessary cookies. It is mandatory to procure user consent prior to running these cookies on your website.
ACCETTA E SALVA